So far in this blog series we’ve been looking at how Enterprise Integration Patterns apply to cloud integration scenarios. We’ve seen that a Shared Database Pattern works well when you have common data (and schema) and multiple consumers who want consistent access.  The Remote Procedure Invocation Pattern is a good fit when one system desires synchronous access to data and functions sitting in other systems. In this final post in the series, I’ll walk through the Asynchronous Messaging Pattern and specifically demonstrate how to share data between clouds using this pattern.

While the remote procedure pattern provides looser coupling than the shared database pattern, it is still a blocking call and not particularly scalable.  Architects and developers use an asynchronous messaging pattern when they want to share data in the most scalable and responsive way possible.  Think of sending an email.  Your email client doesn’t sit and wait until the recipient has received and read the email message.  That would be atrocious. Instead, our email server does a multicast to recipients allows our email client to carry on. This is somewhat similar to publish/subscribe where the publisher does not dictate which specific receiver will get the message.

So in theory, the sender of the message doesn’t need to know where the message will end up.  They also don’t need to know *when* a message is received or processed by another party.  This supports disconnected client scenarios where the subscriber is not online at the same time as the publisher.  It also supports the principle of replicable units where one receiver could be swapped out with no direct impact to the source of the message.  We see this pattern realized in Enterprise Service Bus or Integration Bus products (like BizTalk Server) which promote extreme loose coupling between systems.

There are a few challenges when dealing with this pattern.

What are things to consider when doing this pattern in a cloud scenario?

Let’s say that the fictitious Seroter Corporation has a series of public websites and wants a consistent way to push customer inquiries from the websites to back end systems that process these inquiries.  Instead of pushing these inquiries directly into one or many CRM systems, or doing the low-tech email option, we’d rather put all the messages into a queue and let each interested party pull the ones they want.  Since these websites are cloud-hosted, we don’t want to explicitly push these messages into the internal network, but rather, asynchronously publish and poll messages from a shared queue hosted by Amazon Simple Queue Service (SQS). The polling applications could either be another cloud system (CRM system Salesforce.com) or an on-premises system, as shown below.

So I’ll have a web page built using Ruby and hosted in Cloud Foundry, a SQS queue that holds inquiries submitted from that site, and both an on-premises .NET application and a SaaS Salesforce.com application that can poll that queue for messages.

Setting up a queue in SQS is so easy now, that I won’t even make it a sub-section in this post.  The AWS team recently added SQS operations to their Management Console, and they’ve made it very simple to create, delete, secure and monitor queues. I created a new queue named Seroter_CustomerInquiries.

In my Ruby (Sinatra) application, I have a page where a user can ask a question.  When they click the submit button, I go into the following routine which builds up the SQS message (similar to the SimpleDB message from my previous post) and posts a message to the queue.

The hard part when building these demos was getting my signature string and hashing exactly right, so hopefully this helps someone out.

After building and deploying the Ruby site to Cloud Foundry, I could see my page for inquiry submission. 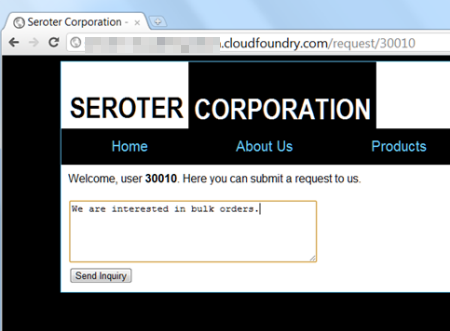 When the user hits the “Send Inquiry” button, the function above is called and assuming that I published successfully to the queue, I see the acknowledgement page.  Since this is an asynchronous communication, my web app only has to wait for publication to the queue, not invoking a function in a CRM system.

To confirm that everything worked, I viewed my SQS queue and can clearly see that I have a single message waiting in the queue.

With our message sitting safely in the queue, now we can go grab it.  The first consuming application is an on-premises .NET app.  In this very feature-rich application, I poll the queue and pull down any messages found.  When working with queues, you often have two distinct operations: read and delete (“peek” is also nice to have). I can read messages from a queue, but unless I delete them, they become available (after a timeout) to another consumer.  For this scenario, we’d realistically want to read all the messages, and ONLY process and delete the ones targeted for our CRM app.  Any others, we simply don’t delete, and they go back to waiting in the queue. I haven’t done that, for simplicity sake, but keep this in mind for actual implementations.

In the example code below, I’m being a bit lame by only expecting a single message. In reality, when polling, you’d loop through each returned message, save its Handle value (which is required when calling the Delete operation) and do something with the message.  In my case, I only have one message, so I explicitly grab the “Body” and “Handle” values.  The code shows the “retrieve messages” button click operation which in turn calls “receive” operation and “delete” operation.

When the application runs and pulls the message that I sent to the queue earlier, it looks like this.

Nothing too exciting on the user interface, but we’ve just seen the magic that’s happening underneath. After running this (which included reading and deleting the message), the SQS queue is predictably empty.

I went ahead and sent another message from my Cloud Foundry app into the queue.

This time, I want my cloud CRM users on Salesforce.com to pull these new inquiries and process them.  I’d like to automatically convert the inquiries to CRM Cases in the system.  A custom class in a Force.com application can be scheduled to execute every interval. To account for that (as the solution below supports both on-demand and scheduled retrieval from the queue), I’ve added a couple things to the code.  Specifically, notice that my “case lookup” class implements the Schedulable interface (which allows it be scheduled through the Force.com administrative tooling) and my “queue lookup” function uses the @future annotation (which allows asynchronous invocation).

Much like the .NET application above, you’ll find operations below that retrieve content from the queue and then delete the messages it finds.  The solution differs from the one above in that it DOES handle multiple messages (not that it loops through retrieved results and calls “delete” for each) and also creates a Salesforce.com “case” for each result.

When I view my custom APEX page which calls this function, I can see the button to query this queue.

When I click the button, our function retrieves the message from the queue, deletes that message, and creates a Salesforce.com case. 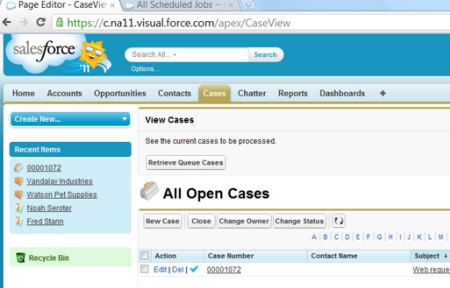 Cool!  This still required me to actively click a button, but we can also make this function run every hour.  In the Salesforce.com configuration screens, we have the option to view Scheduled Jobs.

To actually create the job itself, I had created an Apex class which schedules the job.

Note that I use the System.schedule operation. While my statement above says to schedules the doCaseLookup function to run every 5 minutes, in reality, it won’t.  Salesforce.com restricts these jobs from running too frequently and keeps jobs from running more than once per hour. One could technically game the system by using some of the ten allowable polling jobs to set of a series of jobs that start at different times of the hour. I’m not worrying about that here. To invoke this function and schedule the job, I first went to the System Log menu.

From here, I can execute Apex code.  So, I can call my start() function, which should schedule the job.

Now, if I view the Scheduled Jobs view from the Setup screens, I can see that my job is scheduled.

This job is now scheduled to run every hour.  This means that each hour, the queue is polled and any found messages are added to Salesforce.com as cases.  You could use a mix of both solutions and manually poll if you want to (through a button) but allow true asynchronous processing on all ends.

Asynchronous messaging is a great way to build scalable, loosely coupled systems. A durable intermediary helps provide assurances of message delivery, but this patterns works without it as well.  The demonstrations in this post shows how two cloud solutions can asynchronously exchange data through the use of a shared queue that sits between them.  The publisher to the queue has no idea who will retrieve the message and the retrievers have no direct connection to those who publish messages.  This makes for a very maintainable solution.

My goal with these posts was to demonstrate that classic Integration patterns work fine in cloudy environments. I think it’s important to not throw out existing patterns just because new technologies are introduced. I hope you enjoyed this series.