How do YOU prefer to interact with infrastructure clouds? A growing number of people seem to prefer APIs, SDKs, and CLIs over any graphical UI. It’s easy to understand why: few GUIs offer the ability to create the repeatable, automated processes needed to use compute at scale. I just wrote up an InfoQ story about a big update to the AWS EC2 Run Command feature—spoiler: you can now execute commands against servers located ANYWHERE—and it got me thinking about how we interact with resources. In this post, I’ll try and figure out who cares about GUIs, and, show off an example of the EC2 Run Command in action.

If you’re still stuck dealing with servers and haven’t yet upgraded to an IaaS-agnostic cloud-native platform, then you’re looking for ways to create a consistent experience. Surveys keep showing that teams are flocking to GUI-light, automation-centric software for configuration management (e.g. Chef, Ansible), resource provisioning (e.g. Terraform, AWS CloudFormation, Azure Resource Manager), and software deployment. As companies do “hybrid computing” and mix and match servers from different providers, they really need to figure out a way to establish some consistent practices for building and managing  many servers. Is the answer to use the cloud provider’s native GUI or a GUI-centric “multi-cloud manager” tool? I don’t think so.

Multi-cloud vendors are trying to put a useful layer of abstraction on top of non-commodity IaaS, but you end up with what AWS CEO Andy Jassy calls the “lowest common denominator.” Multi-cloud vendors struggle to keep up with the blistering release pace of public cloud vendors they support, and often neutralize the value of a given cloud by trying to create a common experience. No, the answer seems to be to use these GUIs for simple scenarios only, and rely primarily on APIs and automation that you can control.

But SOMEONE is using these (multi)cloud GUIs! They must offer some value. So who is the real audience for the cloud provider portals, or multi-cloud products now offered by Cisco (Cliqr), IBM (Gravitant), and CenturyLink (ElasticBox)?

I think AWS nailed its target use case with EC2 Run Command. When it first launched in October of 2015, it was for AWS Windows servers. Amazon now supports Windows and Linux, and servers inside or outside of AWS data centers. Run ad-hoc PowerShell or Linux scripts, install software, update the OS, you name it. Kick it off with the AWS Console, API, SDK, CLI or via PowerShell extensions. And because it’s agent based and pull-driven, AWS doesn’t have to know a thing about the cloud the server is hosted in. It’s a straightforward, configurable, automation-centric, and free way to do basic cross-cloud management.

How’s it work? First, I created an EC2 “activation” which is used to generate a code to register the “managed instances.” When creating it, I also set up a security role in Identity and Access Management (IAM) which allows me to assign rights to people to issue commands. 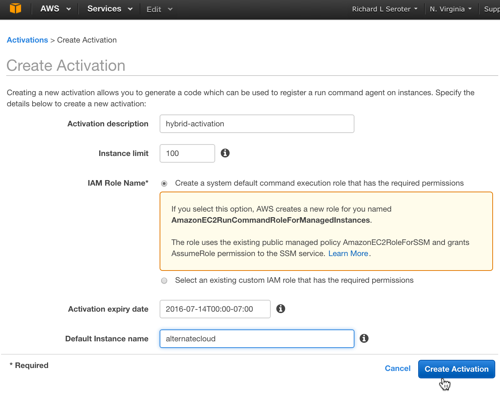 Out of the activation, I received a code and ID that’s used to register a new server. With the activation in place, I built a pair of Windows servers in Microsoft Azure and CenturyLink Cloud. I logged into each server, and installed the AWS Tools for Windows PowerShell. Then, I pasted a simple series of commands into the Windows PowerShell for AWS window:

The commands simply download the agent software, installs it as a Windows Service, and registers the box with AWS. Immediately after installing the agent on servers in other clouds, I saw them listed in the Amazon Console. Sweet.

For instance, I could do a silly-simple “ipconfig” ad-hoc request against my two servers … 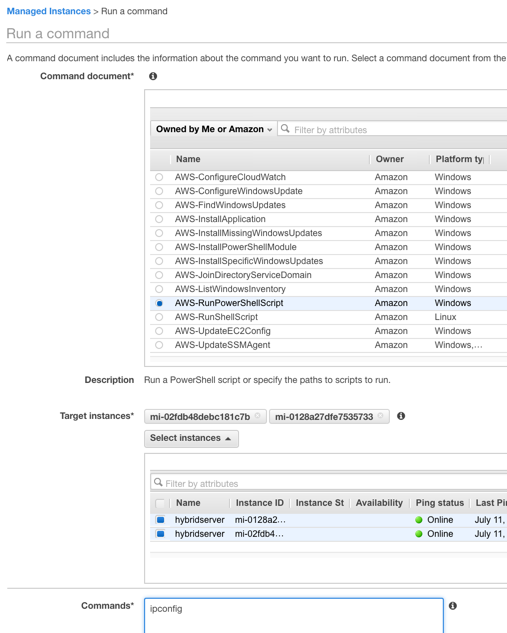 … and I almost immediately received the resulting output. If I expected a ton of output from the command, I could log it all to S3 object storage. 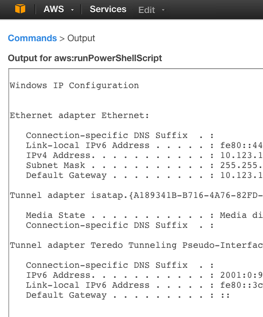 As I pick documents to execute, the parameters change. In this case, choosing the “install application” document means that I provide a binary source and some parameters: 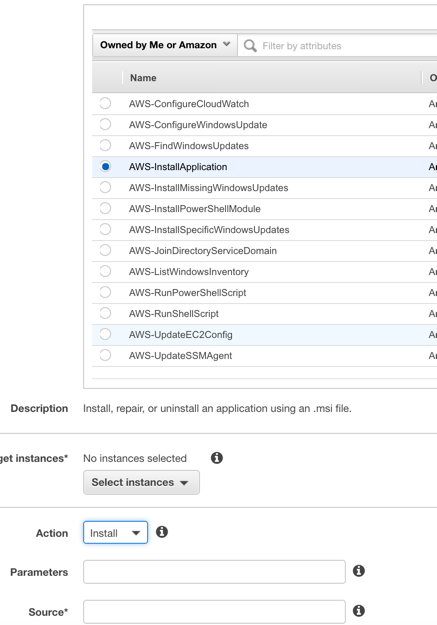 I’ve shown off the UI here (ironically, I guess), but the real value is that I could easily create documents or execute commands from the AWS CLI or something like the Node SDK. What a great way to do hybrid, ad-hoc management! It’s not a complete solution and doesn’t replace config management or multi-cloud provisioning tools, but it’s a pretty handy way to manage a fleet of distributed servers.

There’s definitely a place for GUIs when working with infrastructure clouds, but they really aren’t meant for power users. If you’re forcing your day-to-day operations/service team to work through a GUI-centric tool, you’re telling them that you don’t value their time. Rather, make sure that any vendor-provided software your operations team gets their hands on has an API. If not, don’t use it.

What do you think? Other scenarios with using the GUI makes the most sense?