The “integration as a service” space continues to heat up, and Microsoft officially entered the market with the General Availability of Windows Azure BizTalk Services (WABS) a few weeks ago.  I recently wrote up an InfoQ article that summarized the product and what it offered. I also figured that I should actually walk through the new installation and deployment process to see what’s changed. Finally, I’ll do a brief assessment of where I’d consider using this vs. the other cloud-based integration tools.

Why am I installing something if this is a cloud service? Well, the development of integration apps still occurs on premises, so I need an SDK for the necessary bits. Grab the Windows Azure BizTalk Services SDK Setup and kick off the process. I noticed what seems to be a much cleaner installation wizard.

After choosing the components that I wanted to install (including the runtime, developer tools, and developer SDK) …

… you are presented with a very nice view of the components that are needed, and which versions are already installed.

At this point, I have just about everything on my local developer machine that’s needed to deploy an integration application.

Next, I’m asked to pick an instance name, edition, geography, tracking database, and Windows Azure subscription. There are four editions: basic, developer, standard, and premium. As you move between editions (and pay more money), you have access to greater scalability, more integration applications, on-premises connectivity, archiving, and high availability.

I created a new database instance and storage account to ensure that there would be no conflicts with old (beta) WABS instances. Once the provisioning process was complete (maybe 15 minutes or so), I saw my new instance in the Windows Azure Portal. 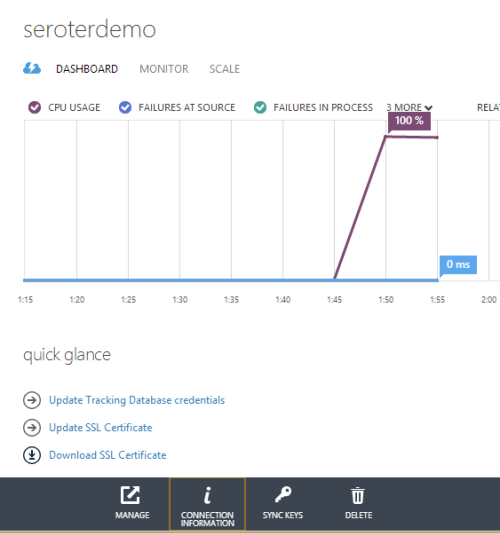 The Scale tab showed me the option to add more “scale units” to a particular instance. Basic, standard and premium edition instances have “high availability” built in where multiple VMs are beneath a single scale unit. Adding scale units to an instance requires standard or premium editions.

In the technical preview and beta releases of WABS, the developer was forced to create a self-signed certificate to use when securing a deployment. Now, I can download a dev certificate from the Portal and install it into my personal certificate store and trusted root authority. When I’m ready for production, I can also upload an official certificate to my WABS instance.

WABS projects are built in Visual Studio 2012/2013. There’s an entirely new project type for WABS, and I could see it when creating a new project.

Let’s look at what we have in Visual Studio to create WABS solutions. First, the Server Explorer includes a WABS component for creating cloud-accessible connections to line-of-business systems. I can create connections to Oracle/SAP/Siebel/SQL Server repositories on-premises and make them part of the “bridges” that define a cloud integration process.

Besides line-of-business endpoints, what else can you add to a Bridge? The final palette of activities in the Toolbox is shown below. There are a stack of destination endpoints that cover a wide range of choices. The source options are limited, but there are promises of new items to come. The Bridges themselves support one-way or request-response scenarios.

Bridges expect either XML or flat file messages. A message is defined by a schema. The schema editor is virtually identical to the visual tool that ships with the standard BizTalk Server product. Since source and destination message formats may differ, it’s often necessary to include a transformation component. Transformation is done via a very cool Mapper that includes a sophisticated set of canned operations for transforming the structure and content of a message. This isn’t the Mapper that comes with BizTalk Server, but a much better one.

A bridge configuration model includes a source, one or more bridges (which can be chained together), and one or more destinations. In the case below, I built a simple one-way model that routes to a Windows Azure Service Bus Queue.

Double-clicking a particular bridge shows me the bridge configuration. In this configuration, I specified an XML schema for the inbound message, and a transformation to a different format.

At this point, I have a ready-to-go integration solution.

To deploy one of theses solutions, you’ll need a certificate installed (see earlier note), and the Windows Azure Access Control Service credentials shown in the Windows Azure Portal. With that info handy, I right-clicked the project in Visual Studio and chose Deploy. Within a few seconds, I was told that everything was up and running. To confirm, I clicked the Manage button on the WABS instance page was visited the WABS-specific Portal. This Portal shows my deployed components, and offers tracking services. Ideally, this would be baked into the Windows Azure Portal itself, but at least it somewhat resembles the standard Portal. 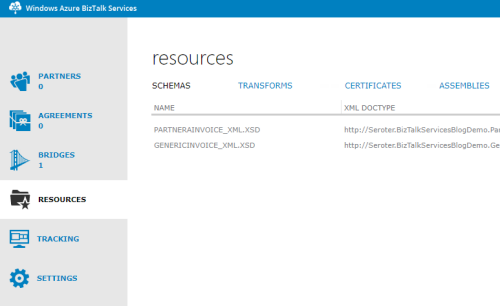 So it looks like I have everything I need to build a test.

I finally built a simple Console application in Visual Studio to submit a message to my Bridge. The basic app retrieved a valid ACS token and sent it along with my XML message to the bridge endpoint. After running the app, I got back the tracking ID for my message.

To actually see that this worked, I first looked in the WABS Portal to find the tracked instance. Sure enough, I saw a tracked message.

As a final confirmation, I opened up the powerful Service Bus Explorer tool and connected to my Windows Azure account. From here, I could actually peek into the Windows Azure Service Bus Queue that the WABS bridge published to. As you’d expect, I saw the transformed message in the queue. 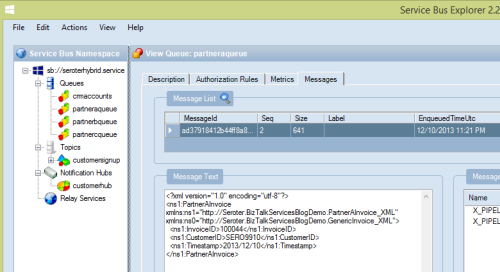 There is a wide spectrum of products in the integration-as-a-service domain. There are batch-oriented tools like Informatica Cloud and Dell Boomi, and things like SnapLogic that handle both real-time and batch. Mulesoft sells the CloudHub which is a comprehensive platform for real-time integration. And of course, there are other integration solutions like AWS Simple Notification Services or the Windows Azure Service Bus.

So where does WABS fit in? It’s clearly message-oriented, not batch-oriented. It’s more than a queuing solution, but less than an ESB. It seems like a good choice for simple connections between different organizations, or basic EDI processing. There are a decent number of source and destination endpoints available, and the line-of-business connectivity is handy. The built in high availability and optional scalability mean that it can actually be used in production right now, so that’s a plus.

There’s still lots of room for improvement, but I guess that’s to be expected with a v1 product. I’d like to see a better entry-level pricing structure, more endpoint choices, more comprehensive bridge options (like broadcasting to multiple endpoints), built-in JSON support, and SDKs that support non-.NET languages.

What do you think? See any use cases where you’d use this today, or are there specific features that you’ll be waiting for before jumping in?