It’s been a good week for .NET developers who like the cloud.  First, Microsoft makes a huge update to Windows Azure that improves everything from billing to support for lots of non-Microsoft platforms like memcached and Node.js. Second, there was a significant announcement today from Tier 3 regarding support for .NET in a Cloud Foundry environment.

I’ve written a bit about Cloud Foundry in the past, and have watched it become one of the most popular platforms for cloud developers.  While Cloud Foundry supports a diverse set of platforms like Java, Ruby and Node.js, .NET has been conspicuous absent from that list.  That’s where Tier 3 jumped in.  They’ve forked the Cloud Foundry offering and made a .NET version (called Iron Foundry) that can run by an online hosted provider, or, in your own data center. Your own private, open source .NET PaaS.  That’s a big deal.

I’ve been working a bit with their team for the past few weeks, and if you’d like to read more from their technical team, check out the article that I wrote for InfoQ.com today.  Let’s jump in and try and deploy a very simple RESTful WCF service to Iron Foundry using the tools they’ve made available.

First off, I pulled the source code from their GitHub library.  After building that, I made sure that I could open up their standalone Cloud Foundry Explorer tool and log into my account. This tool also plugs into Visual Studio 2010, and I’ll show that soon [12/22 update: note that Iron Foundry’s production URL has changed from the value used in the screenshot below]. 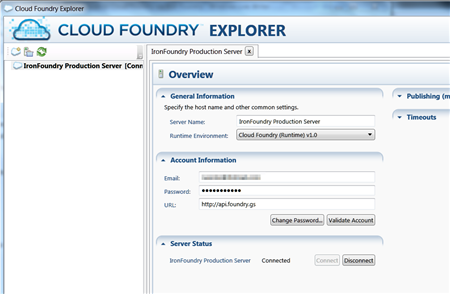 It’s a nice little tool that shows me any apps I have running, and lets me interact with them.  But, I have no apps deployed here, so let’s change that!  How about we go with a very simple WCF contract that returns a customer object when the caller hits a specific URI.  Here’s the WCF contract:

The implementation of this service is extremely simple.  Based on the input ID, I return one of a few different customer records.

My WCF service configuration is also pretty straightforward.  However, note that I do NOT specify a full service address. When I asked one of the Iron Foundry developers about this he said:

When an application is deployed, the cloud controller picks a server out of our farm of servers to which to deploy the application. On that server, a random high port number is chosen and a dedicated web site and app pool is configured to use that port. The router service then uses that URL (http://server:49367) when requests come in to http://<application&gt;.gofoundry.net 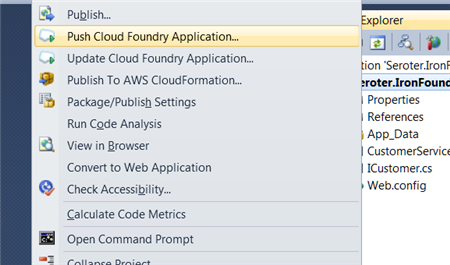 Now I can select my existing Iron Foundry configuration named Sample Server (which points to the Iron Foundry endpoint and includes my account credentials), select a name for my application, choose a URL, and pick both the memory size (64MB up to 2048MB) and application instance count [12/22 update: note that Iron Foundry’s production URL has changed from the value used in the screenshot below].

The application is then pushed to the cloud. What’s awesome is that the application is instantly available after publishing.  No waits, no delays.  Want to see the app in action?  Based on the values I entered during deployment, you can hit the URL at http://serotersample6.gofoundry.net/CustomerService.svc/CustomerService/100. [12/22 update: note that Iron Foundry’s production URL has changed, so the working URL above doesn’t match the values I showed in the screenshots]

Sweet.  Now let’s check out some diagnostic info, shall we?  I can fire up the standalone Cloud Foundry Explorer and see my application running.

What can I do now?  On the right side of the screen, I have options to change/add URLs that map to my service, increase my allocated memory, or modify the number of application instances.

On the bottom left of the this screen, I can find out details of the instances that I’m running on.  Here, I’m on a single instance and my app has been running for 5 minutes.

Finally,  I can provision application services associated with my web application.

Let’s change my instance count.  I was blown away when I simply “upticked” the Instances value and instantly I saw another instance provisioned.  I don’t think Azure is anywhere near as fast. 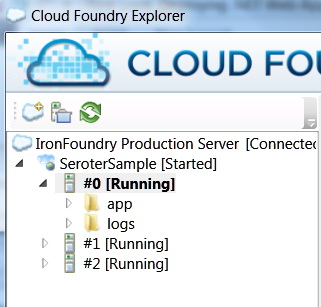 What if I like using the vmc command line tool to administer my Iron Foundry application?  Let’s try that out. I went to the .NET version of the vmc tool that came with the Iron Foundry code download, and targeted the API just like you would in “regular” Cloud Foundry.[12/22 update: note that Iron Foundry’s production URL has changed from the value used in the screenshot below].

It’s awesome (and I guess, expected) that all the vmc commands work the same and I can prove that by issuing the “vmc apps” command which should show me my running applications.

Not everything was supported yet on my build, so if I want to increase the instance count or memory, I’d jump back to the Cloud Foundry Explorer tool.

What a great offering. Imagine deploying this within your company as a way to have a private PaaS. Or using it as a public PaaS and have the same deployment experience for .NET, Java, Ruby and Node applications.  I’m definitely going to troll through the source code since I know what a smart bunch build the “original” Cloud Foundry and I want to see how the cool underpinnings of that (internal pub/sub, cloud controller, router, etc) translated to .NET.

I encourage you to take a look.  I like Windows Azure, but more choice is a good thing and I congratulate the Tier 3 team on open sourcing their offering and doing such a cool service for the community.