I’ve been spending way too much time building BizTalk maps recently, but, I did uncover some interesting behavior of the Scripting functoid that I thought was worth sharing.

My opinion is that using “Inline C#” (or VB.NET or JScript) in the Scripting functoid should only be for very simple operations, not page-long functions. In my case, I was receiving a datetime value in “dd/MM/yyyy” format, and needed to convert it to the XSD datetime format of “yyyy-MM-dd”. There were a few dates I needed to do this for, so I used the Scripting functoid and wrote a simple function like this:

So I simply cut and pasted the same “function” into multiple Scripting functoids. In essence, the map looked like this:

I wasn’t completely sure what would happen when the XSLT was generated for the map. Would it allow multiple functions with the same signature? Would I have to create functions called “DateConvert1”, “DateConvert2”, etc? When I did this as a test using a trial map and function, even though I had two functoids storing a function called “DoSomethingCool”, the output XSLT looked like this:

Interesting. So, the XSLT generation engine noticed two methods with the same function name and only put one of them into the map’s XSLT. Lots of questions then.

Let’s look at more complete picture of the generated XSLT, containing not just the generated code, but the function call as well. 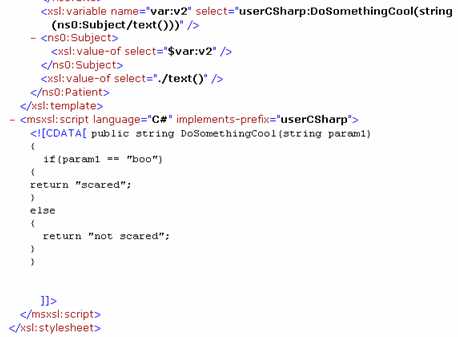 Notice that the return type appears irrelevant as it’s simply being printed out in the XML node. Parameter name of “DoSomethingCool” doesn’t matter when the function is called. The input parameter is always converted to “string”, so input type doesn’t matter either.

So, just be aware of these sort of side-effects of reusing the same inline code function within a map. I like that I can reuse a simple function over and over, but it’s good to know how the code generation actually works. Odds are you’d use an external component for some of these situations, but what’s the fun in that?