So I’ve built a “BizTalk For Business Analysts” class that I’m delivering next week to 20 or so of my new co-workers. We’re covering the basics of BizTalk, and I’ve built three lab exercises that deal with the Orchestration Designer for Business Analysts, using SharePoint/InfoPath with BizTalk, and building and consuming BAM models. When testing my BAM lab, I kept encountered a scenario where I deployed the BAM infrastructure, used the Tracking Profile Editor (TPE) to associate the orchestration with the BAM model, but for some reason, barely any data was getting captured.

After trying a few things, I finally found the reason. I had built a partial orchestration (that the class will complete) that looks like this … 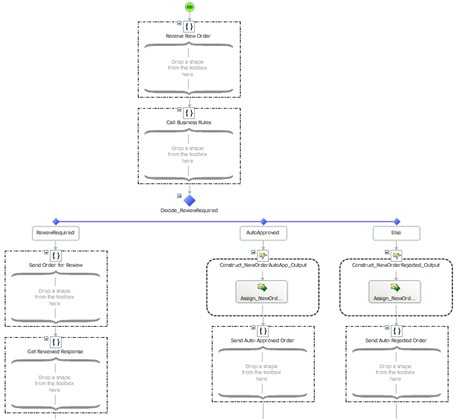 The idea is that the class will fill in the shapes for each placeholder. Well, what I figured out was that every send/receive that was contained in a Group shape failed to get recorded. Now Stephen Thomas mentioned an issue with using a Group as the last shape in the orchestration (which I did NOT), and I haven’t seen anything noted about avoiding Groups altogether for BAM scenarios. The help docs mention that the Group shape can’t be used for tracking, so I decided to take it a step further and just flip all my Group shapes to non-transactional Scope shapes. Sure enough, now everything gets tracked. Good way to end a week.